One Mile to Go and one week to go before I leave for the Waterfowl Festival in Easton, Maryland.  November 11-13th you'll find me exhibiting my work at the Armory on Harrison Street.  I'll be one of many artists in town for the festival.  You'll find paintings, sculpture and wood carvings by some of the top artists in the U.S. at locations all over Easton.  The 'flat work' will all be at the Armory.

I just finished this piece, One Mile to Go.  It's the last of the bigger pieces that I'll be taking.  By tomorrow, it will be on a Fed-ex truck heading east.  I just have a few small pieces left then I'll be done!! 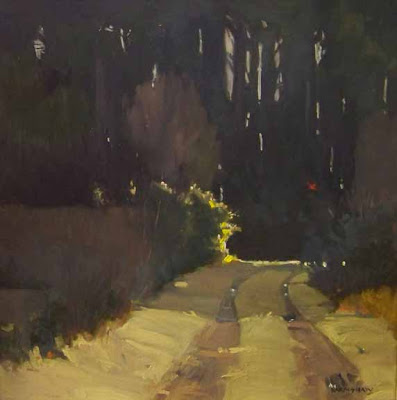 Phew!  I've just finished this oil that took more planning time than painting time.  I wanted the piece to be about mood first - color and light second but also trying to show the minute or two before the sun sets and the colors change quickly from warm to cold.  You can see the cool color moving in across the painting, gobbling up the warm light.  I couldn't help but think of Stephen King's "The Langoliers"  while painting this.

This painting is one of 35 originals that I'll be exhibiting at The Waterfowl Festival in Easton, Maryland, November 11-13th. 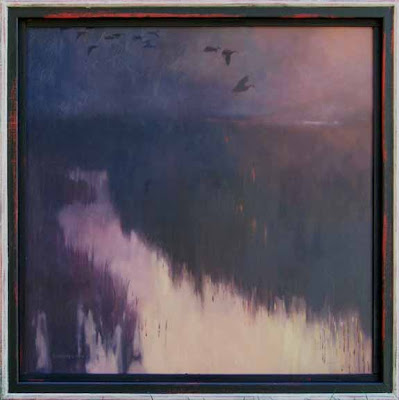 A New Series, "Color and Light"

I started my 75 for $75 project after reading the book, "The Outliers" by Malcolm Gladwell.  Gladwell talks about the "10,000-Hour Rule", stating that the success can often be attained by practicing a skill 10,000 times.  He uses the Beatles (and many others) as an example.  When in Germany, they were playing about 8 hours a day....and this is how they refined and perfected their music.

Since switching to oil six years ago, I've been struggling with 'painterly brush strokes'.  After 30 years of working in watercolor I was tired of detailed rendering.  I knew how I wanted to paint but wasn't sure how to get there.  So I challenged myself to painting 10,000 oil studies.  My rules were simple....quick studies with no detail and no rendering.  Emphasis would be on broad juicy brush strokes.  The 75 for for $75 project has been very successful.  I've learned so much and see the evidence in my larger oils.  But I'm still just beginning the project and have about 9,800 (or thereabouts) paintings to go.  Starting on November 15th, I'll be back to painting at least one daily 75 for $75 until the end of the year.  My son, Shane Rebenschied, a commercial illustrator, will be joining me again.  He may not have time to do one a day but he'll contribute some.

I'd also like to loosen up when I paint landscapes.  So based on my first project, I'm starting a series called "Color and Light" - all landscapes.  They'll be simple tonalist oils that talk about color, light and mood.  I've been painting landscapes along these lines for a few years but I want to get braver with them.  For some reason, painting small takes the fear out.  I'm starting with 4" x 4" on Ampersand cradled board, which is a panel mounted to birch, 3"4" deep...sort of like a gallery-wrapped canvas.  The sides will be painted a solid color that is harmonious with the painting and sold unframed.  The following images are the first six in the series.  I'll be taking these to the Waterfowl Festival in Maryland in a week or two.  If they go over well, I will be doing more.  I'm not sure if I'll be selling these online or just through shows and galleries - we'll see!

I'm not wild about the way these images have photographed.  The cradled board I'm using has a texture that makes them difficult to photograph.  Also, I may add a bird or two to some of the images - nothing more than dots on the horizon.   The first is my favorite but it's a lousy photo.  When it's dry I'll scan it and see if I can get a better image.


All of these little guys have been sold 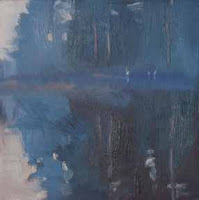 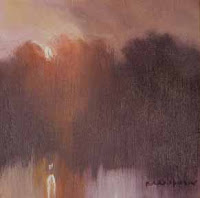 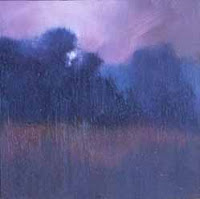 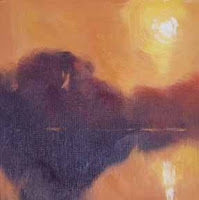 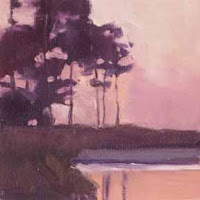 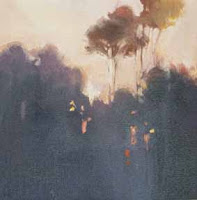 I'm gearing up for The Waterfowl Festival in Easton, Maryland, November 11-13. Easton is a charming little town on Maryland's Eastern Shore.  Though the show is called The Waterfowl Festival, it's not just about waterfowl.  There are exhibits all over town; paintings, sculpture, world class wood carvers - also fly fishing and retriever demonstrations.  Masterclasses are offered in painting, carving and photography.  Joe Garcia and I will be jointly teaching a one-day Master class in watercolor on Thursday, November 12. As the proceeds of the festival benefit conservation and education projects for the Chesapeake, I'm proud to be exhibiting for my 26th year!!

From the festival's website:  "Paying homage to the annual migrating Canada geese flying overhead, Easton closes colonial streets, decorates historic buildings with natural greens, and recruits 1,500 volunteers to greet 15,000 visitors and 300 of the nation's finest wildlife artists, craftsmen and vendors with a ready smile and a helping hand. Excitement radiates throughout the town and neighboring St. Michaels, Oxford and Tilghman Island. Enjoy the 41st annual Festival, the tributaries of the Chesapeake Bay, fine restaurants, and quaint shops lining historic streets."

"Waterfowl Festival, Inc. is dedicated to wildlife conservation, the promotion of wildlife art, and the celebration of life on Maryland''s Eastern Shore." In its 41 years, the Festival has become a leader in the conservation of waterfowl and wildlife habitat. More than $5 million has been raised and donated to projects throughout the Atlantic Flyway, and in particular the Chesapeake Bay.

This year, all of the painters will be under one roof in the Armory on Harrison Street.  This is where you'll find me and my thirty+ paintings, including this new 20" x 16" oil Ovation. 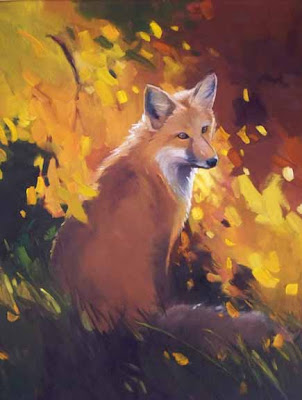 "Light on Water" isn't the title - but it is until I can come up with something better.  This is an 18"x 18" oil that I'll be showing at the Waterfowl Festival in Easton, Maryland, November 11-13.  Easton is a great little town on the Eastern Shore.  Nearby is one of my favorite places in the U.S. - the Blackwater Refuge.  This painting is of the Blackwater with Canada Geese.  Three or four years ago I did a 7" x 7" study that I liked so much, I decided to do a larger piece based on the study.  I'm not sure if the painting is completely finished - I may make a minor change or two after I've lived with it for a few days. 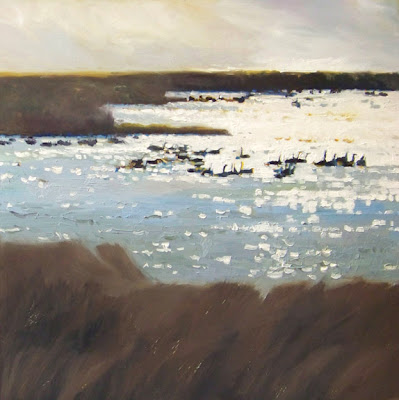 Many of my blog followers are artists, so I'm giving you a heads-up!  I got an email from Charles Frey, wanting to buy a piece shown on my website.  The bad English and sentence structure was sort of a give-away but I'm sure there must be legit art collectors out there who are not fluent in English  (are there?)

I googled 'Charles Frey' + art - and got almost 8,000 hits on this scumbag.  Beware!!  In fact, beware of any 'client' contact via email requesting information on (usually) your most expensive piece or pieces.
Google the name.  If nothing comes up, let the person know that because of unscrupulous scammers who prey on poor artists, you only ship a painting once payment has cleared through a credit card or Paypal.   Don't accept a check or money order.   If you accept a credit card, call the credit card company first (not with the number the 'client' provides - but find it through the credit card company's website) and make sure the account is legitimate.

I sell a lot of work over the internet, and it isn't difficult to sort out the scammers from the legitimate clients.
Posted by Adele at 8:23 AM 4 comments:

I'm not sure of the title for this new piece, but for now it's titled, "Sun Bath".  It's a 20" x 16" oil on Ampersand board.  I'll be exhibiting this piece at The Waterfowl Festival in Easton, Maryland in November. 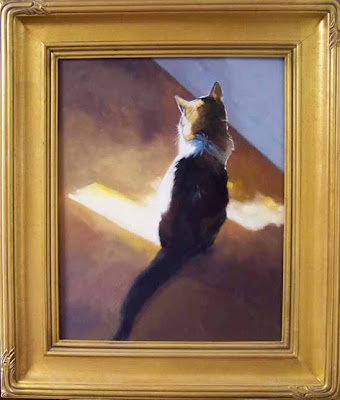 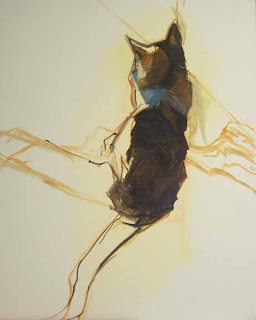 I don't bother with a tight pencil drawing - I just knock it in with a brush.  This is the start of 'Sun Bath'.

These five new oils are for Legacy Gallery, just in time for their 23rd Anniversary Annual Open House, which starts Saturday, October 22.  The oils are all the same size - 24" x 12" on 2" deep Ampersand cradled board.  I enjoy painting agave, not just because of their fabulous colors, but also because the broad leaves make for interesting compositions.

This is the finished piece that I posted yesterday.  I'm hoping I didn't push the detail too far.  I resisted putting the spots on the cactus pads but the piece felt like it needed some interest.

This piece isn't finished - but you get the idea.  It's a 7.5" x 20" on Ampersand Gessobord.  I'm having fun painting it and am trying hard to keep it painterly.  When finished, it will be heading for Legacy Gallery in Scottsdale, Arizona.

This little 8" x 10" oil, "Dash Away",  is heading for Legacy Gallery's Holiday Small Works Show which hangs from December 8 through the end of the month.  Legacy Gallery is in Scottsdale, Arizona, and is the finest gallery in Scottsdale! 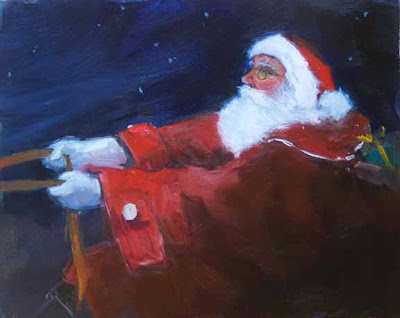 This 18" x 24" oil is hot off the easel - just finished this afternoon.  It's heading for The Walt Horton Fine Art Gallery in Beaver Creek, Colorado....a classy gallery in a beautiful area!  You'll find the gallery in the Plaza at Beaver Creek, next door to Paderweski Fine Art, by the ice rink.  The gallery manager tells me that sometimes bears can be seen rummaging in the trashcans in the plaza. The perfect spot for a wildlife gallery!

Walt Horton Fine Art was started by Walt and his wife Peggy.  Sadly, Walt died shortly after the gallery opened but you can still see his fabulous sculpture in the gallery including his signature species, the bear! 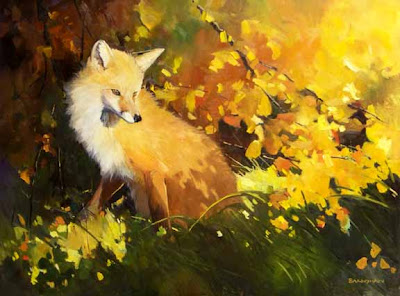 "Gold Fever"
18" x 20" oil on panel
This painting can be purchased through Walt Horton Fine Art Gallery
Posted by Adele at 2:23 PM 3 comments: