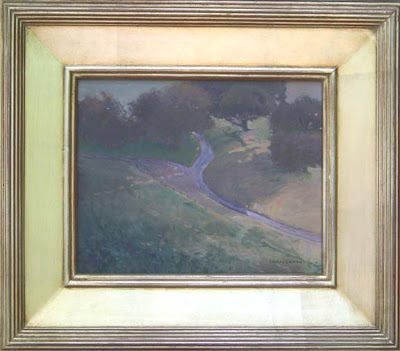 "The Low Road" is a view of Santa Ysabel, California from a hill above the valley. 8 x 10. 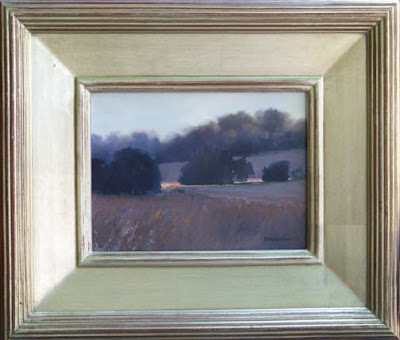 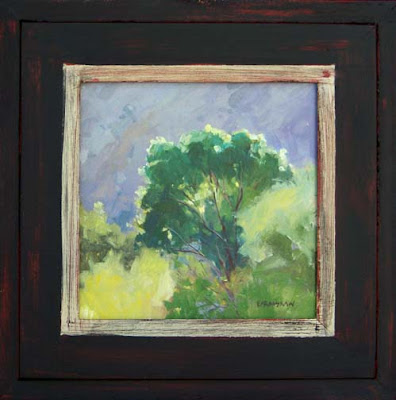 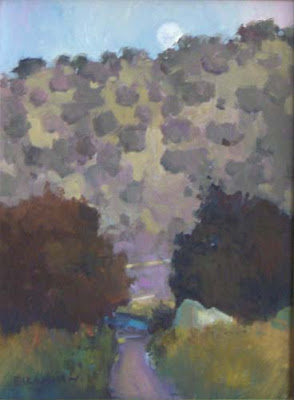 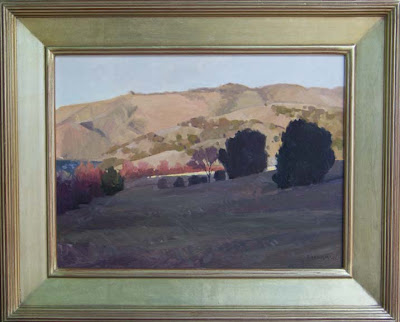 This oil of the Santa Ysabel Valley is 12 x 16, titled Edge of Day. 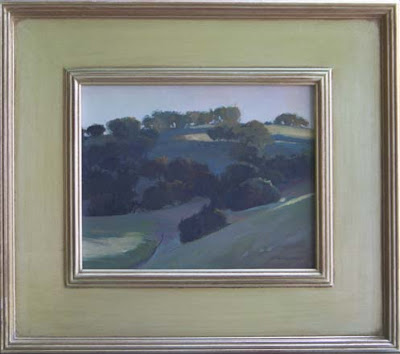 She had a final meal of blueberry & grasshopper and died a few hours later.
Posted by Adele at 7:19 AM 1 comment: 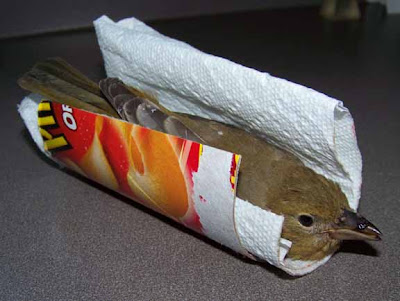 Another photo of Mrs. Pringles in her Pringles can. She has blueberry stuck to her beak.
Posted by Adele at 2:50 PM No comments: 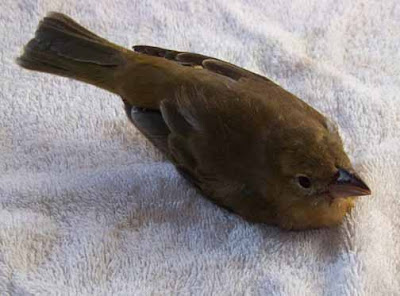 I've raised many songbirds - often fledglings that well-meaning but misguided people have rescued, thinking they've fallen from the nest. In recent years, I've turned them over to the bird-lady, an older woman in Sedona who cares for injured or orphaned birds. (In Arizona - one may legally care for a songbird for up to 90 days).

A few days ago, my neighbor called. Would I come and get a bird what didn't seem quite right - perhaps it hit a window? The bird-lady is retiring, so I have agreed to take care of the bird.

I think Mrs. Pringles is a female summer tanager. She shows no sign of injury but is unable to keep her balance. Her condition declined dramatically during the first 24 hours...perhaps a slow cranial bleed? But she has not gotten any worse since then - so I'm hoping that in time she'll recover. She needs a bird-sized wheel-chair but in the meantime, Mrs. Pringles spends her days in a 6" Pringles container that I have cut in half lengthwise. This arrangement holds her more-or-less upright. However she sometimes wiggles out of this and I find her standing on her head in the corner of her cage.

I've decided that Mrs. Pringles is incapacitated because of injury rather than illness. If she were sick - she wouldn't have such a voracious appetite. Tanagers eat insects and fruit. She eats as many grasshoppers as I can catch and loves blueberries. Fortunately, my friends, Joe & Anne Garcia, are here - so Joe goes out on grasshopper hunts several times a day.

Mrs. Pringles knows I am the hand that feeds her - and opens her mouth in anticipation of a fat grasshopper when she sees me. I'll keep you posted on her progress.
Posted by Adele at 7:52 AM 1 comment: 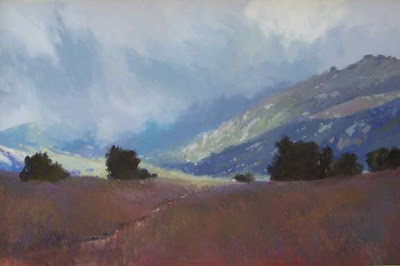 Every now and then a painting will click from the first brushstroke to the last. This is one of them. It's a 24" x 36" oil on Ampersand board. This particular landscape is one of my favorite places to paint - an area called Mataguay in north San Diego County. I prefer it in the spring or fall when inclement weather softens edges and pushes colors towards the misty blues and soft greens.

I've done this piece for my one-person landscape show, 'The Road Less Traveled" at the Santa Ysabel Gallery, 30352 Hwy 78, Santa Ysabel, San Diego County, California. The show opens on September 5th with a reception from 4 - 8 PM, and will continue to hang until October 11.