"No Peanuts for Santa" 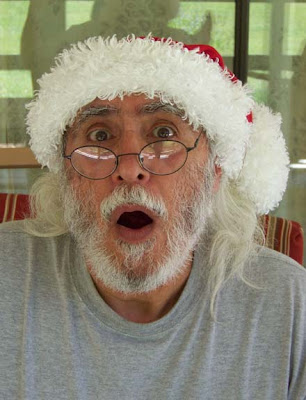 Four years ago, I discovered that I'm allergic to peanuts. The life-threatening diagnosis is also life changing in a positive way. Eating in restaurants and airplanes isn't quite as easy as it used to be but I feel so much better....it is a fair trade.

I learned that there are two to three millions others in the U.S. with peanut allergy. The majority of the severely allergic are small children. I belong to an online peanut-allergy forum where, in December several years ago, I posted a 'No Peanuts for Santa' poem, where Santa discovers he is also peanut allergic. The response was so good, I decided that when I had time, I would do illustrations to accompany the poem and self-publish a children's book, 'No Peanuts for Santa'.

The time has come...so this month, I've started working on the book. But who would agree to pose as Santa? Who else, but my good friend and fellow artist, Joe Garcia!

I share with you, one of the reference photos.
Posted by Adele at 6:40 AM