The first two oils are 6" x 6".  I guess I've got cows on my mind as I'm heading off to New Zealand soon and will be there for three months.  New Zealand is known for sheep but there are a lot of cows too.  You'll also see many Wapiti and red deer farms.  Wapiti is a North American elk that is raised in New Zealand for export.

When New Zealand was first settled by the Europeans in the mid 1800's, my ancestors included,  many animals were intentionally and accidentally introduced including the deer, opossum, hedgehog, stoat, weasel and the European rat.   As New Zealand has no predators, the introduced animals rapidly destroyed forests and flightless bird life.  The war against the rat, stoat, weasel and opossum is ongoing with predator-free islands and peninsulas offering refuge for New Zealand's endangered birds.  While in New Zealand for the next three months, particularly the last month while artist in residence at NPS Mt. Bruce, just 1K from the Mt. Bruce sanctuary for native birds, I'll be studying and painting New Zealand's birds.  When I return to New Zealand full-time, I hope to live near a Kiwi Sanctuary in Northland (the top part of the North Island) where dogs and cats are not allowed.  Dogs are the #1 threat to the Kiwi. 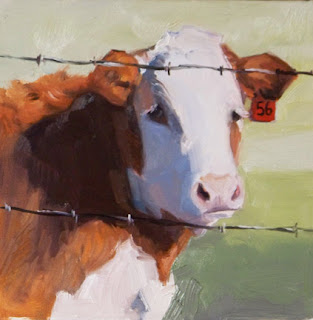 Planning the Escape
6" x 6" oil on board 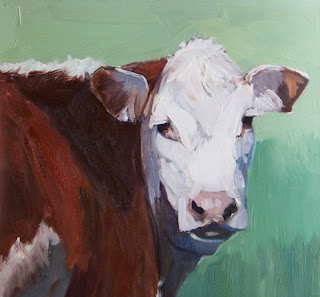 
The third cow painting, The Local, is an 8" x 6" oil on a Raymar linen panel.  I did it a year or two ago and put it aside as it lacked punch...but I couldn't figure out what the problem was.  After doing all of my little 75/75 bird studies, I looked at this little painting and knew what that it needed stronger color and broad brush strokes, though I didn't touch the background. Ten minutes later I was very happy with it. 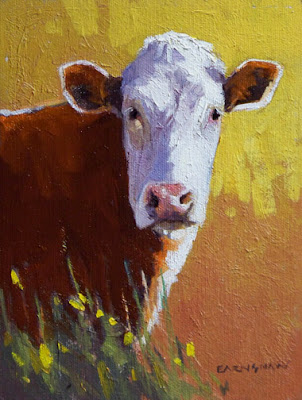