I'm Back in the Studio!

It's been a long time since I've been in my studio, which was in Sedona, Arizona and is now in Opua, New Zealand.  I sold my Arizona house in October, arrived in New Zealand on December 6th and I had a house under contract by Christmas.  Move-in day was January 18th but my 20' container with all my 'stuff' didn't arrive for another week - though parts of my big easel are still to be delivered. My new hometown is in the Bay of Islands, called the Winterless North because of the subtropical climate.  I found a cute little house on two acres of native bush, just a mile from the beach and a couple of miles from Paihia.

This is the first day I've had a studio to work in - so I decided to get back into shape by painting a little winter robin for my 75 for 75 project. 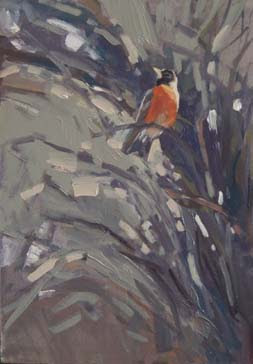