Sometimes, keeping my studies simple is like pulling hen's teeth. This little guy didn't take me any longer than the other studies - but the detail happened in spite of me fighting it all the way.  As I keep saying, the purpose of my studies is to become more painterly - to say more with simplicity and brush work. Two steps forward and one step back. I know many collectors love detail but by the time many artists have been painting for 30+ years, we want to say more than detail has to offer.  I want to paint mood, light, color......which doesn't require more brush strokes but rather saying more with each brush stroke.

This is a New Zealand Falcon.  They're found in most parts of New Zealand but are considered an uncommon endemic.  Endemic = a species that is natural or native to a specific place.  I've seen a few but the harrier, an abundant native, is most likely the bird of prey that you'll see in New Zealand skies (or on the roads)!  I see them flapping madly trying to lift a dead possum or hedgehog off the road before getting run over.  Consequently, I've seen quite a few flat harriers on New Zealand's highways. 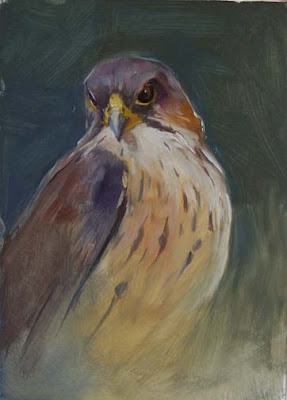