This is the second painting in my new project, The Boats of Opua. This is the Nunki. Like many of the other yachts berthed at the Opua Marina, it's from an international port...San Francisco! I can often pick out these boats as they have a lot of equipment on deck, including solar panels, but the Nunki didn't give any clues other than the name of the port written on the stern. Maybe she's been in port for a while.

Other than three crossings across the Pacific by passenger ship, I'm an armchair sailor. I've read Joshua Slocum, Sir Francis Chichester, Robin Graham's Dove, and a dozen others. I've also read biographies by those that didn't make it, including Survive the Savage Sea.  So I look at the yachts berthed in Opua and wonder where they've been - part of the reason for this project. 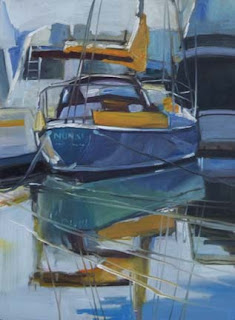