This is a newly finished oil of a North Island Brown Kiwi. Though kiwi are endangered, I live in a part of New Zealand where they can still be heard calling at night. 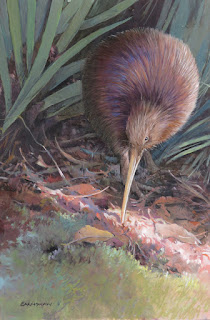 Though born and raised in New Zealand, I lived in the United States for the major part of my life. I returned to live in New Zealand in 2012. One of my goals in returning to my homeland, was to raise money for kiwi conservation. Growing up at the edge of a large tract of native forest, I always hoped to see a kiwi. My father would tell me, "they're all gone".  They were, at least in our part of the country. However, through conservation efforts such as predator control, the kiwi are making a comeback.  Now I am fortunate to live in the Bay of Islands, very close to the Opua Forest where I can hear kiwi calling at night. Bay Bush Action, our local conservation group is a registered charity dedicated to protecting our native wildlife in the Opua Forest. With continued trapping, Bay Bush Action hopes to lower the predator numbers to the point where forty kiwi can be released into the forest next year to join the ten native couples already there.

Kiwi Ora has been released as a signed, open-edition full colour print on heavy, museum quality paper. It sells for $75 in both the US and New Zealand, not including shipping. If you would like to help our kiwi by purchasing a print, clicking on this link will take you to Bay Bush Action's website where you'll find more information on the print and make a purchase using Paypal.

I have donated 100% of my time and painting to help save the kiwi. I do not many any profit - in fact I'm the one that will be packing and shipping the print you purchase. If you have any questions on the print, please email me:  adele.earnshaw (leave out this bit) @gmail.com.  (Written this way to hopefully foil the spammers). The original is not available for sale.