The Boats of Opua - Rock and Roll Star

On Tuesday afternoon, I spent some time wandering around the marina, photographing boats. This yacht caught my eye as she looked like she had just arrived in New Zealand. I watched as the sail was lowered and she continued into the port under power.  Her name and port were on the hull; Rock and Roll Star, Plymouth and she was flying the Union Jack. I googled the name and found that the boat is owned by a couple who started their sailing adventure in early 2013. They were in Tonga a week or two ago.

I must admit, I cheated a bit and punched up the colour of the sea and made it a little choppier. The water in Opua is often this colour, but that afternoon the sea was flatter and grey. 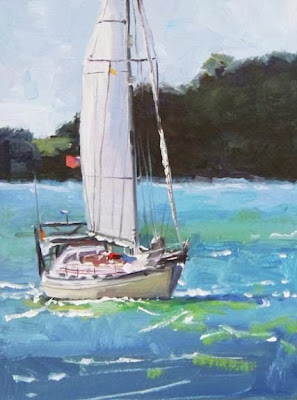 The Boats of Opua - Rock and Roll Star
8" x 6" oil on gessoed board, unframed

This little study has been donated as a fundraiser for my town of Opua
Posted by Adele at 4:04 PM