When I was a kid, every town in New Zealand had a hotel & pub; hotel upstairs and the pub down. During WWI, as a wartime measure, liquor could not be served after 6 pm but it became a way of life and didn't change until 1967. But while 6 o'clock closing was still in effect, men would get off work and make a dash to the pub to drink as much as they could in 45 minutes. This became known as The Six O'Clock Swill.  Now we have more civilized hours but many of the iconic pubs still remain. They all look similar to this one - the Hikurangi Hotel. Another Kiwi icon is the Four Square grocery store that you see on the right side. Hikurangi is a little town north of Whangarei, not much more than a wide spot in the road. 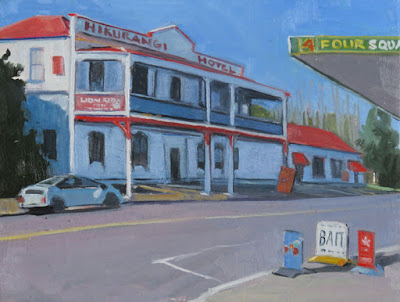