Shortly after I posted my piece for yesterday's 75 for $75, Shane called to report that he just finished his piece...but it was already too dark to photograph it, so he sent me his image this morning  Officially #37!  We're now halfway to our goal of 75 paintings by June 15th.  To see all of the 37 paintings, go to the 75 for $75 page on my website by clicking on the link.   As a reminder, the paintings we're doing this month for our 75 for $75 project are all 5" x 7" oil on panel, unframed.  There is an additional charge of $5 for mailing.  Paintings will be mailed once they're dry and varnished.  It usually takes a week, sometimes more, to be dry enough to ship, then they'll be sent through the post office, first class mail.

I've explained the project in earlier posts, but will explain it again in case you missed it.  My goal in doing 75 for $75 is to get better at spontaneous bird studies.  I want to get more painterly in my work - and since switching from watercolor to oil four years ago, I've had a struggle painting birds without rendering them to death.   As I don't supply my galleries with bird studies, this online project doesn't compete with the eight galleries that carry my work.

I'm doing the 75 for $75 project with my son, Shane, who is a commercial illustrator.  He does book covers for the major publishers.  You can see his commercial work at www.blot.com.  As his illustrations are digital, he decided to join me in this project as an opportunity to get back into oil painting.  Shane graduated from Art Center College of Design as an illustration major in 1998. 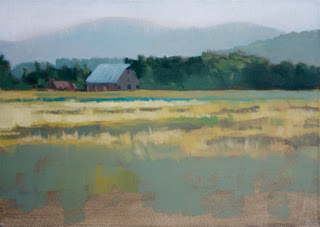 Shane Rebenschied - Truth and Consequences
5" x 7" oil
SOLD
(I think the sale on this piece broke all records. It sold within minutes of posting it.)
Posted by Adele at 10:26 AM