I know I won't gain favors with birders, but I admit that I love house sparrows.   When my son was 9, he brought home a baby house sparrow when his friend's dog destroyed a nest built in ivy on the side of a building.  Shane saved two of the babies, but one died shortly after.  It was close to fledging, so I figured we would only have to take care of it for a few weeks and then we'd release it. Wrong!

We didn't name her (she would be leaving soon!) so she came to be known as Fatty-bird for her ferocious appetite.  She lived with us for almost a year.  Every flat surface that she frequented in the house, was covered in paper towels.    She went outside during the day but by dusk, she let me know she wanted inside by flying against the window, making little scratchy sounds on the glass with her feet.  I would go outside with a cookie, she would land on my shoulder and ride inside with me.  She slept in my bedroom's ceiling light fixture.  I now have respect for the tenacity and determination of a house-sparrow and understand why the species is so successful, to the detriment of other species.   I have lots of great stories about Fatty-bird but I won't tell them all now.  I must remember to tell you the popcorn story....and the time her tail caught on fire. 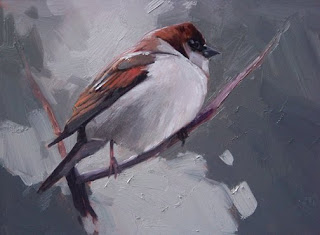