My muse doesn't like cold weather so she must have headed south.  It has been one of those days where I spent the day wiping off paintings...including my 75/75 study, which was getting out-of-control-detailed.  It actually was a nice little piece, but as you probably know, my goal with the studies is to loosen up.  Detail is not tolerated.

So I gave up on doing a study and instead,  rummaged through my supplies and found an interesting surface that I've not worked on before.  At one of the plein air festivals, I was given a Source Tek linen panel, #66 oil primed panel.  My friend Lindsay Scott hates oil primed linen so I was turned off it before ever trying it...but to my surprise, it was an interesting surface to paint on!

Today's effort is a little 6" x 4" oil on an oil primed linen panel.  I like it.  Not sure what I'm going to do with it at this point.  The bottom of the painting is actually as dark as the top, but as the bottom is painted in a more opaque paint, it has photographed lighter. 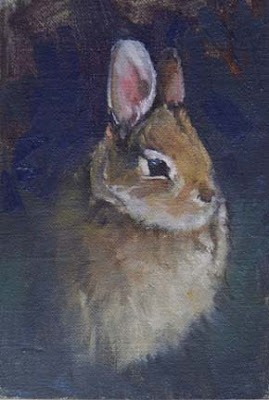