It's a snowy day in my part of the world.  The roads that weren't closed were a mess so I made chicken stew and spent the day at the easel.

My first oil study is a tree swallow, which are found over most of the U.S.   I came to know a tree swallow on a first name basis some years ago when during Arizona's monsoon season, I drove over a wet bundle of feathers on the road near my home.  Realizing it was alive, I stopped and rescued a bedraggled tree swallow.  After drying him with the hair dryer (on warm) he sat in a basket on my big drafting table while I painted.  Initially he wasn't very responsive, but after dozing under a warm light for a few hours he started to preen himself. A few hours later he was sitting on the edge of the basket singing and preening - even allowing me to scratch his head.  Later that day when it stopped raining, I released him where I found him.  He flew off without a backyard glance, but he certainly added to my day.

The tree swallow in my study is a male in Spring plumage.  The little guy I rescued was a male in fall plumage.  (see photo at the end of this post)  I really like this study - one of my favorites so far. 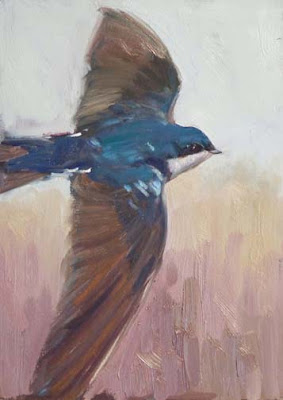 215 - Tree Swallow
7" x 5" oil study on board, unframed
SOLD
My second study is another vulture piece.  I could have sold the first one a dozen times so decided to do another, not so similar piece. 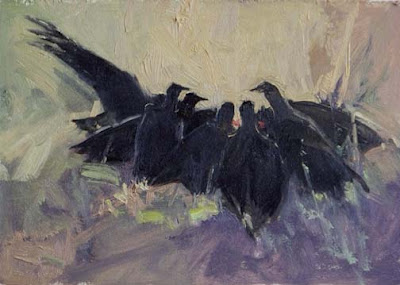 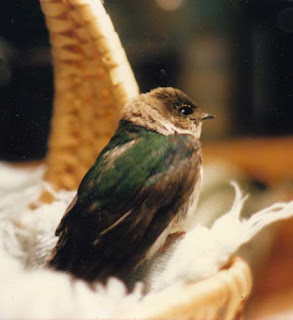 This is the tree swallow that lived to see another day.
Posted by Adele at 2:15 PM