Painting with the kids of Eketahuna

Yesterday morning I worked with some of the local kids making banners for the Anzac Day memorial at the newly restored Anzac Bridge in Eketahuna (90 minutes north of Wellington on New Zealand's North Island).  As my father spent five years in Europe with the RNZAF during WWII, my grandfather was wounded and gassed in WWI and great uncles were killed at Gallipoli, I considered the time working with the kids well spent.  Kay Flavell, director of NPS Mt. Bruce where I'm currently artist-in-residence, is responsible getting the ball rolling for the restoration of the neglected Eketahuna Anzac Bridge. It was built in 1924 and inscribed with the names of local soldiers lost in WWI.  Anzac Day, first observed in 1916, commemorates Australian and New Zealand men and women who were killed in war as well as honoring returned servicemen and woman.

I had a great time with the kids who worked well and enthusiastically..quite a few budding artists among them! 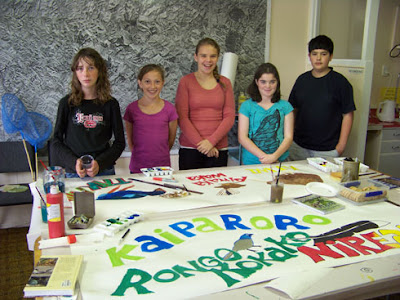