As I continue to paint my little oil studies alphabetically, I realize there aren't a lot of choices for the letter 'I'.  Ibis, orioles (genus Icterus) and a few other birds that I don't have much information on.....so why not an Ibis?  I see the White and Glossy Ibis when I'm on the East Coast - and the White-faced Ibis around Blythe and Brawley when I'm driving to California.  But seldom paint Ibis though I paint lots of Egret - a similar bird.  The egret is Cinderella and an Ibis the ugly step-sister. They look great in a group, but not nearly as elegant in flight. Perhaps I misjudge the Ibis and should get to know them a little better. Anyway, this Ibis is the Eastern U.S. variety - the White Ibis. 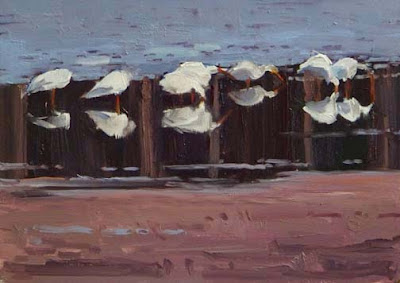