A Green Heron for Today 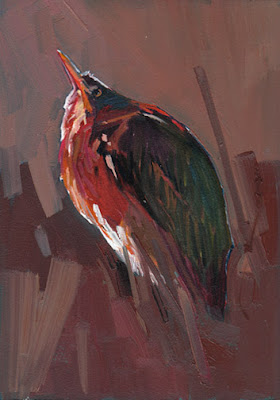 SOLD
Yesterday my blog wouldn't allow me to post an image.  I kept getting a 'Server Rejected' error message.  I googled the problem and I think it had something to do with hitting the limit of 1000 images on the blog. Once you hit 1000 images, blogspot is supposed to create another album but this didn't happen,  so I spent an hour or two deleting old posts from 2008...and voila!  I can post images again.
Today's image is a green heron. I've always steered away from painting them - they're such strange looking birds - but I liked this little guy with his beak up in the air so decided to give it a go.
My focus on last year's 75 for $75 was brush work....but this year it seems to be color.  I'm still working on brush strokes, daring to use really thick paint - but good things seem to be happening with my use of color. I particularly like the background colors in yesterday's egret piece.  The idea for my 75 for $75 project came last year after I read Malcolm Gladwell's book, The Outliers, where Gladwell states that the more often you do something, the better you get....and that doing something 10,000 times is the secret to success.  As I felt my brushwork needed to improve, I challenged myself to paint 75  5" x 7" oil studies in 30 days.
Last year my son, Shane (commercial illustrator) joined me in the project. This year he's been overloaded with his freelance work but yesterday he announced that he might have a couple of days this week to paint. I'm looking forward to posting a couple of Shane's contributions to the project!
Posted by Adele at 10:04 AM