I've been wanting to figure out how to paint fields of green grass without rendering...so decided to paint cattle egret in flight.  They're seen from coast to coast, but I often see them out in the middle of the desert at the California/Arizona border in Blythe and Brawley, both agricultural areas where it is not uncommon to see mixed groups of cattle egret and white-faced ibis.

I like this piece for its simplicity.  I'm so used to painting great or snowy egret, I just shortened the necks and legs - and voila, cattle egret! 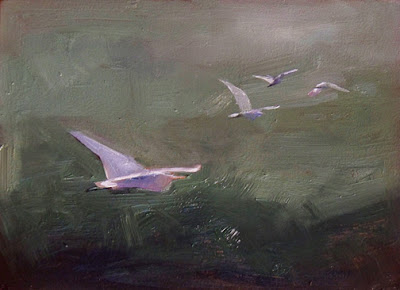