There's a storm coming with much colder temperatures and snow  :-(   so I had to tear myself away from the easel this morning to run errands.  But I did get my two 75 for $75's finished and photographed!  I can see that I'm straying away from the 'bird study' idea.  I'm not sure if this is a good or a bad thing - but for the moment, I'll see where it takes me.

The first study is of baby quail.  Many years ago I raised five baby Gambel's Quail from day old chicks.  Someone found the chicks huddled up against a big ol' toad on her patio...no sign of the parents.  As she watched, the toad suddenly decided it wanted baby quail for dinner.  Who would have guessed that a toad would eat a baby bird!   The baby was halfway down the toad's throat when she saved it.   She took all five babies to the local radio station and I ended up with them.  I didn't hear the toad story until months later - but had wondered why one of the baby quail had what seemed to be dry glue on his head.  Toad spit!

I've since seen baby California Valley Quail and they looked exactly like these little guys.  I'm guessing that young Bobwhite look much the same. 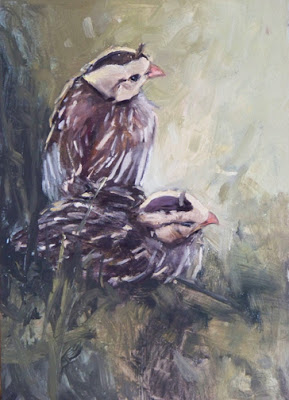 My second study for the day is of Red-winged Blackbirds.  Like the gull study that I did the other day, I painted little bird shapes with no detail, allowing the group of birds to have impact, rather than just one larger bird. 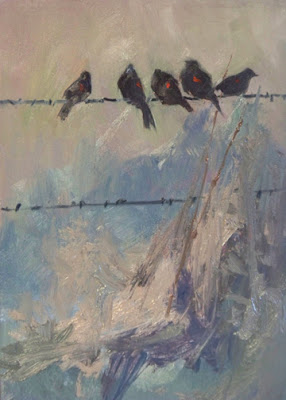